The apparent power in a system can be greater than the real power due to the following reasons;

Therefore, the power factor of any system typically takes a value between 0 and 1.

When the power factor is 1, all the energy supplied by the source is consumed by the load.

Therefore, when the power factor is less than 1, more current is required to deliver the same amount of useful energy.

Electric utility providers require that industrial and commercial customers maintain the power factors of their respective loads within specified limits or be subject to additional charges.

They also must maintain a high power factor on their distribution system for efficiency.

They will typically bill customers for a low power factor or they may bill on kVA demand, which is also affected by power factor. Most utilities that bill a power factor penalty require a user to maintain a 95% Power Factor to avoid penalty.

It is often possible to adjust the power factor of a system to very near unity.

This practice is known as power factor correction and is achieved by switching in or out banks of inductors or capacitors.

The usefulness of shunt capacitors in improving power factor of load

Inductive components of a power system draw a lagging reactive power from the supply. It lags by 90 degree to the active power.

The capacitive component of the power system leads by 90 degree to the active power.

The directions of the above two components oppose each other.

Whenever an inductive load is connected to the transmission line, power factor lags because of lagging load current.

To compensate, a shunt capacitor is connected which draws current leading the source voltage. The net result is improvement in power factor.

Consider a load with a lagging power factor cosϕ1. This will consume an active power P1 and a reactive power Q1 as shown in the figure. 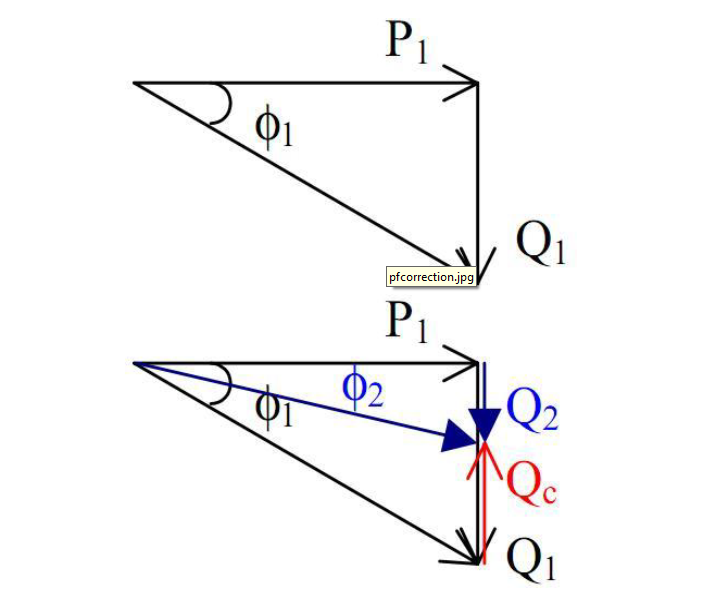 The effects of series and shunt capacitances

This is not a very common method of connecting capacitors. In this method, the voltage regulation is high, but it has many disadvantages. They are,

This is the most common method of connection. . The capacitor is connected in parallel to the unit. The voltage rating of the capacitor is usually the same as or a little higher than the system voltage.

An unloaded synchronous motor can be used to improve the power factor. It is started and connected to the electrical network.

It operates at full leading power factor and puts apparent power onto the network as required to support a system’s voltage or to maintain the system power factor at a specified level.

The condenser’s installation and operation are identical to large electric motors. Its principal advantage is the ease with which the amount of correction can be adjusted; it behaves like an electrically variable capacitor.

If there are harmonics in the waveform caused by switched mode power supplies, the capacitors are not connected directly to the supply lines.

The simplest way to control the harmonic current is to use a filter.

It is possible to design a filter that passes current only at line frequency (e.g. 50 or 60 Hz).

This filter removes the harmonic current, which means that the non-linear device now looks like a linear load.

At this point the power factor can be brought to near unity, using capacitors or inductors as required.

This filter requires large-value high-current inductors, however, which are bulky and expensive.

2. Calculation of series and shunt capacitance’s are done in the same method.

When capacitor is connected in shunt;

Where W is the Wattmeter reading Iconic One Theme | Powered by Wordpress
Go to mobile version